Most of last week felt like a real struggle – like fighting through a thick, gloopy dark. But it also had moments of heart-warming, soul-lifting, and blues-battling wonder that left me feeling like things will be okay, no matter how strange they happen to be now – and they’re what I want to keep my focus on.

Two moments in particular stood out.

I almost ended up in tears in the middle of a field. My sister and I were out for a walk by our local river when a big, big, big bird suddenly swooped above us, circling round and round. We’re used to seeing pigeons (tbh, isn’t everyone?), sea gulls, buzzards, crows, sparrows, herons, cormorants, and egrets on our walks but this was much more special: it was a red kite. Red kites became extinct in England in 1871, and their population recovery has been rocky and very slow since then (although it has recently begun to accelerate). My dad – who basically has the eyes of a hawk – occasionally spots one flying in the distance, and every time he does I always nod along and go “ooh” and “aah” – vaguely aware that there is some sort of bird shaped creature in the sky, but mostly aware of a whole lot of blue/clouds. But this red kite was so. close. and there was no mistaking it. It felt like a very special privilege to witness it swirling through the air just in front of us and had me blinking back tears (it had been a long day). It was utterly awe-inspiring to see, and, especially at a time like this, it felt like a good omen – a much needed reminder that things get better; they recover, they heal, and they thrive. 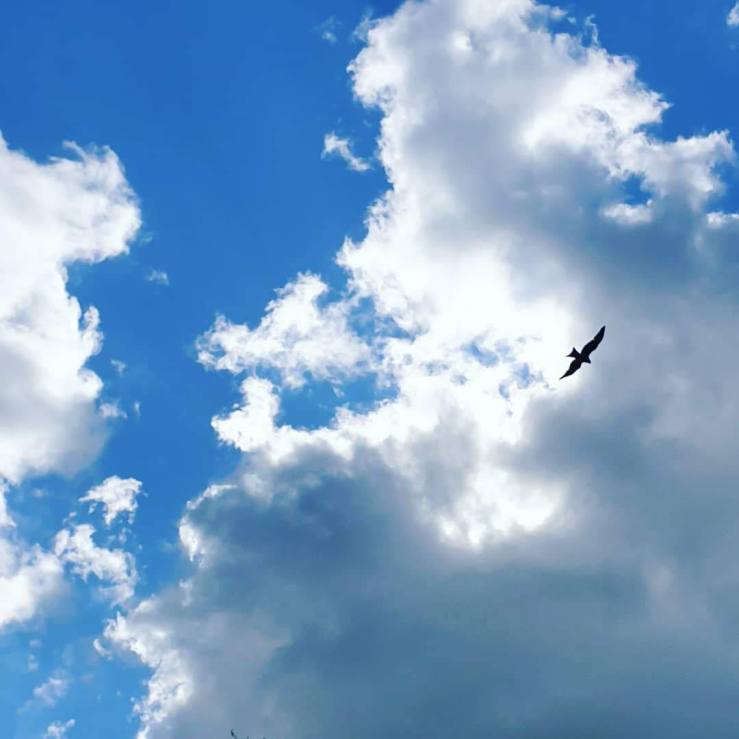 I actually ended up in tears in the middle of a field. This time, it was me and my mum out for a walk. Little did I know, my best friend – who I haven’t seen in person for two months – was out for a run at the same time. Cue a squeal of recognition and disbelief, a flash of happy heart butterflies, a moment where I couldn’t breathe, me bursting into tears, and an appropriately socially distant cry/talk/sob/chat from either side of the path. It was painful because I wanted to run straight into her arms and give her the biggest hug and not let her go, but it was also beautiful because I got to see her in actual physical real 3D life and it was the loveliest, most magical, surprise.

I hope you’ve had your fair share of heart-warming moments too.

Things are hard, but they will get better.

The Devil and the Dark Water on a Deck Chair in the Sunshine... maybe not it's official title but I quite like it! 😉 I'm really enjoying this book by Stuart Turton. It's kinda like the BBC series Sherlock, but at sea and in the seventeenth century. And if that's a sentence that floats your boat, then this is a book that'll float your boat too. 🌊 #thedevilandthedarkwater #stuartturton #ravenbooks #bloomsbury #booksofinstagram #bookstagram #paperback #booktography #books #currentlyreading
This book + a heatwave = a very happy reader! 🌊💙 #maliburising #taylorjenkinsreid #maliburisingbytaylorjenkinsreid #booksofinstagram #bookstagram #booksofig #ukcover #ukedition #booktography #beachread #currentlyreading #readersofinstagram #readersofig #readstagram #bookworm #enjoyingthesunshine #reading #readinginthegarden
This weekend was one of the loveliest weekends I've had in a long time, escaping the crowds on the beaches for the peace of the woodlands just a few miles away. 🌿🌞 I love living near the coast and spending time by/in the sea, but on a hot Bank Holiday weekend you won't find me anywhere near the sand. Leaves and bluebells and burbling streams and rhododendrons and old church ruins overgrown with ivy spilling down the walls were what my heart wanted and what my heart got. 💚 I hope you all had the weekend your hearts wanted too! Here's to a June filled with heart happiness and magical moments! ✨
The Starless Sea by Erin Morgenstern was a beautifully written book but an unbelievably annoying story! Everything was steeped in meaning but felt utterly meaningless. There were no stakes. There was no resolution. There was no plot. I had to drag myself kicking and screaming through the last 100 pages because by that point it had become painfully obvious that the previous 400 had all been a pretty, but ultimately pointless, journey. It's not often I advise people *not* to read a book, but I will make an exception for this one!
Okay human you can turn the page now 📖 #chickensofinstagram #lunathechicken #readinginthegarden #booksandchickens #booksandpets #reading #booksofinstagram #bookstagram #theinvisiblelifeofaddielarue #librarycheckout
Library therapy! 📚📖 Have you read any of these?
Two chapters in and already I can't sing How to Listen's praises enough! I think the world would be a much better place if everyone read this book! 🕊 #howtolisten #katiecolombus #thesamaritans #mentalhealth #mentalhealthbooks #nonfiction #bookstagram #booksofinstagram #currentlyreading
With a book and a kitty cat! 📖🐈 The perfect way to celebrate World Book Day! 💕 #worldbookday #dorathecat #catsandbooks #booksandcats #reading #readingcat #bookworm #bookcat #tryingtoread #catsofinstagram #catstagram
"Music is there to help us enjoy life, not as a means to outdo everyone else. Even if you do compete and a winner is picked - the person who enjoys themselves the most is always the real winner."
Loading Comments...
Comment
×
%d bloggers like this: