‘A stranger greets you by name and invites you inside. At first, you won’t want to leave. Later, you’ll find that you can’t.’

Every 9 years, a mysterious and mind-bending house – ‘too grand for the shabby neighbourhood, too large for the space it occupies’ – appears along a dark alleyway and a victim is lured inside, never to be seen again. In Slade House by David Mitchell we follow a handful of characters as they are led disorientatingly, bewilderingly, and mind-bogglingly to their deaths. 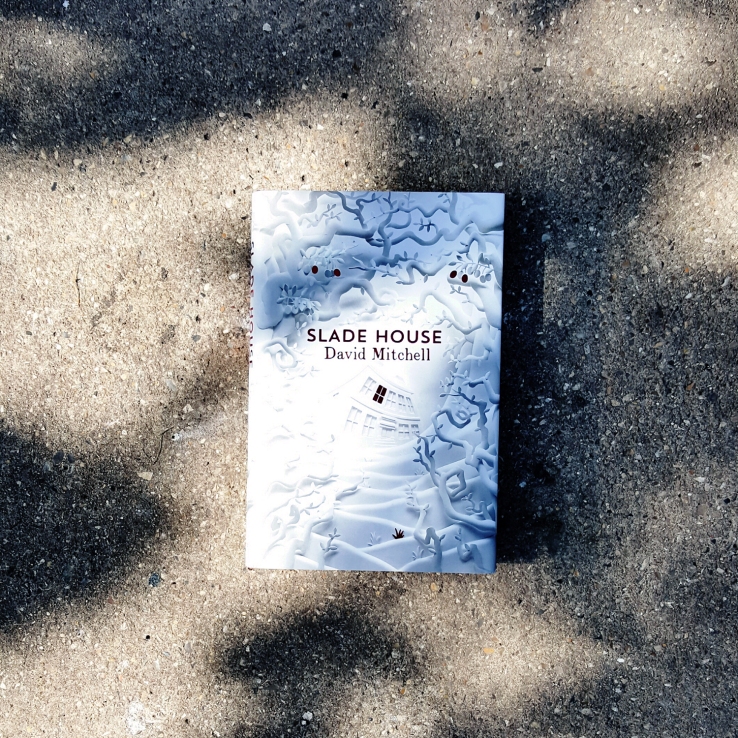 The book is entertaining, bouncing along from one character’s messy demise to another. The individual stories are claustrophobic and macabre; drawing you in, chewing you up and spitting you out of the other side (much like the house). I enjoyed the little details that intertwined cleverly across each narrative (and if you’ve read The Bone Clocks there are plenty of details weaved in from there too), and the ending is satisfying whilst leaving the potential for more.

I wouldn’t jump up and down and beg you to read it, but it is a fun book full of vivid characters and saturated descriptions that kept me wanting to know what was around the corner, through the doorway that surely wasn’t there before, and up the ominous flight of stairs…

Anyone else inspired by the Netflix series to pick up a copy of Shadow and Bone? And did anyone else prefer the adaptation? 🎬📚 #shadowandbone #leighbardugo #bookthoughts #paperbacks #booksofinstagram #bookstagram #bookaholic #booktography #grishaverse
The Devil and the Dark Water on a Deck Chair in the Sunshine... maybe not it's official title but I quite like it! 😉 I'm really enjoying this book by Stuart Turton. It's kinda like the BBC series Sherlock, but at sea and in the seventeenth century. And if that's a sentence that floats your boat, then this is a book that'll float your boat too. 🌊 #thedevilandthedarkwater #stuartturton #ravenbooks #bloomsbury #booksofinstagram #bookstagram #paperback #booktography #books #currentlyreading
This book + a heatwave = a very happy reader! 🌊💙 #maliburising #taylorjenkinsreid #maliburisingbytaylorjenkinsreid #booksofinstagram #bookstagram #booksofig #ukcover #ukedition #booktography #beachread #currentlyreading #readersofinstagram #readersofig #readstagram #bookworm #enjoyingthesunshine #reading #readinginthegarden
This weekend was one of the loveliest weekends I've had in a long time, escaping the crowds on the beaches for the peace of the woodlands just a few miles away. 🌿🌞 I love living near the coast and spending time by/in the sea, but on a hot Bank Holiday weekend you won't find me anywhere near the sand. Leaves and bluebells and burbling streams and rhododendrons and old church ruins overgrown with ivy spilling down the walls were what my heart wanted and what my heart got. 💚 I hope you all had the weekend your hearts wanted too! Here's to a June filled with heart happiness and magical moments! ✨
The Starless Sea by Erin Morgenstern was a beautifully written book but an unbelievably annoying story! Everything was steeped in meaning but felt utterly meaningless. There were no stakes. There was no resolution. There was no plot. I had to drag myself kicking and screaming through the last 100 pages because by that point it had become painfully obvious that the previous 400 had all been a pretty, but ultimately pointless, journey. It's not often I advise people *not* to read a book, but I will make an exception for this one!
Okay human you can turn the page now 📖 #chickensofinstagram #lunathechicken #readinginthegarden #booksandchickens #booksandpets #reading #booksofinstagram #bookstagram #theinvisiblelifeofaddielarue #librarycheckout
Library therapy! 📚📖 Have you read any of these?
Two chapters in and already I can't sing How to Listen's praises enough! I think the world would be a much better place if everyone read this book! 🕊 #howtolisten #katiecolombus #thesamaritans #mentalhealth #mentalhealthbooks #nonfiction #bookstagram #booksofinstagram #currentlyreading
With a book and a kitty cat! 📖🐈 The perfect way to celebrate World Book Day! 💕 #worldbookday #dorathecat #catsandbooks #booksandcats #reading #readingcat #bookworm #bookcat #tryingtoread #catsofinstagram #catstagram
Loading Comments...
%d bloggers like this: